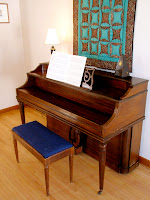 More than 40 years ago, Mrs. Jonker taught me how to play piano, and, even more importantly, ended a childhood embarrassment.  Well, one of them.
The year before, in second grade, I’d been sent to speech therapy for a time until I learned how to properly place my tongue behind my teeth (and not between them) when saying “S.” It was only after my speech lessons that I learned that I had been lisping, and this was the wrong thing to do. I would have had no way of knowing it was embarrassing to have to go to speech therapy for a lisp; in fact, I thought it was wonderful to have the little paper reminder-clock in my desk, the one with the small hand on the 10 and the big hand on the 12, telling me when I was to leave the classroom to go to speech therapy. That little clock made me feel wonderfully special. No one else in the class had a clock like that, or permission to leave the room.
I felt cheated when I learned the truth about what the paper clock had been for. I wondered if people had been making fun of the little blond girl with the lisp.
The next year I began to take piano lessons from Mrs. Jonker; and as I was not the only child in the family to take lessons, there seemed no particular stigma in having to go, though there were some in the family who quickly began to dread lessons as if they were some kind of therapy forced upon us “for our own good.”
Most of us (there were seven kids in the family) went eventually, and we handed down the lesson books, so that by the time the last of us had lessons, the books were filled with so many cute puppy and kitty and “GOOD JOB” stickers that the pages got stuck together.
The first two songs I learned began with middle C. One went up the scale, C-D-E, C-D-E (“Here I go, up a row…”), a happy tune about skipping to a birthday party. The other descended, C-B-A, C-B-A… in a sadder song, which ended, if I am remembering correctly, in childhood tragedy: some poor kid fell down.
Mrs. Jonker instructed me how to properly hold my hands to play these two songs, the happy one and the sad one. She taught me many other songs after those first two. But I would feel those first six notes, the rising and falling notes, many, many years afterward, returning to them again and again, even when there were no piano keys under my fingertips.
I had learned that the happy song was played with my right hand. And the sad song was played with my left hand. Right and left. I had not known the difference between right and left until those first two piano lessons. From then on, when I needed to distinguish between right and left, I had only to think of the correct song, referencing the muscle memory in my fingers, to be able to know right from left.
There are many other ways I might have learned right from left. I was “right-handed” after all. I could have spoken up and said I didn’t know, then maybe someone could have helped me to know right from left. There was that trick of shaping an “L” with the left thumb and first finger as a way of learning which was which. It’s silly, isn’t it, that I missed all of those basic, simple, “rules of thumb” as it were, that would easily have taught me what I needed to know.
So, it was left to Mrs. Jonker and piano lessons to help me out of the shame of not knowing something everyone else knew. To this day, when someone gives me a direction to turn right or left, I sometimes hear those first two piano songs, think of Mrs. Jonker, and feel the songs from my childhood playing in my fingers.

Error: Twitter did not respond. Please wait a few minutes and refresh this page.