Read all about it on my new page, Pretty Things.

My short story, “Tonic”, is in the July/August Ellery Queen Mystery Magazine (EQMM). Two other stories of mine have also appeared in EQMM –“Boys will be Boys”  in the December 2013 issue and “Open Ended”  in December 2015. 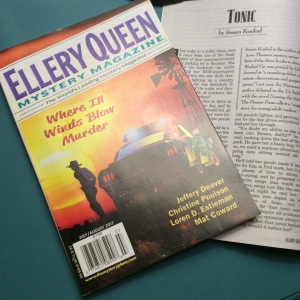 Stephen King calls EQMM the “world’s best mystery magazine” and the magazine and its stories have won numerous prizes. To have three stories picked up by EQMM is amazing.

Check out EQMM and think of subscribing (available in print and for reading devices) or picking up a single issue (available at bookstores), especially if you love mysteries in bite-sized pieces – you might find a new mystery writer you want to check out.